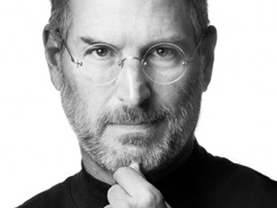 What Jobs Taught Us About Driving Broadband Utilization

As a marketer, Steve Jobs has always been on my short list of ‘most admired.’  His ability to innovate and wrap his products in the flag of an Apple culture was (and is) remarkable. My wife, the traditional Apple zealot explained what his leaving meant… she said simply, that Apple will “never be the same” – that what’s missing is the ‘magic touch’ that made Jobs legendary.

What Jobs was able to do was tie technology to meaning… to, as Don Draper quips in the famous Mad Men scene… take technology from a “glittering lure” and, on rare occasion, “engage the public beyond flash, if they have a sentimental bond with the product.” See clip:

Jobs drove e-Solutions with his vision, innovation, and design… but mostly by convincing consumers that to Think Different was special:

He used the Apple culture (or the cult of Apple depending on your view) to engage and drive e-solution adoption. By making his products easy-to-use, he went beyond mere adoption and achieved utilization. The type of deep, involved utilization that made upgrades a must have, not just a nice to have.

It was Jobs vision that broadband would make the computer the ‘digital hub’ of the home that drove electronics and accompanying applications at a dizzying rate, transforming an industry and a world of users. Without broadband, it is at least possible that Apple does not exist today. Instead, it’s the most valuable consumer brand in the world.

So now Apple now has a void. But more significantly for our purpose is the question… how do we, as broadband evangelists… do what he did?

I tend to cringe when I hear broadband described as a ‘utility.’  While that might be an accurate description, would anyone trying to drive exciting, transformative e-solutions describe the road there as a ‘utility?’ Does our economy’s future depend on a ‘utility?’

No – what we need are solutions that transform our world, build on a platform for innovation.  We need to be as vigorous in selling broadband’s benefits as Jobs would with the latest iSomething.

Broadband has the ability to radically change our entire world in orders of magnitude more than it already has. But we need to get past the utilitarian view of broadband – looking at what it enables and instead what it empowers. At the advent of broadband, Apple’s campaign challenged us to push the world forward.  Is what we’re doing enough to drive the complete transformative power of broadband… or do we need to Think Different?

The Think Agency is comprised of a group of extremely entrepreneurial, experienced, and dedicated professionals. With a proven track record of serving high-profile brands in the region, Think develops strategies and implements solutions that maximize the performance of your marketing efforts.